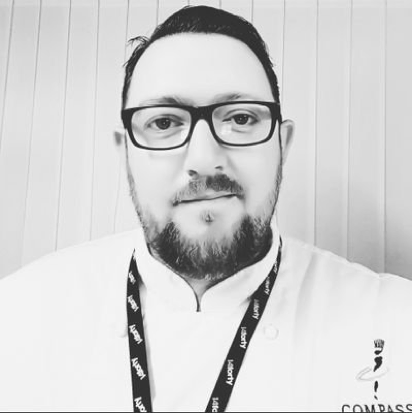 I have been in the catering industry for 18 years, I gained my qualifications through an apprenticeship at the Marriott Forest of Arden hotel in Warwickshire (3 rosettes) then moved on throughout the midlands in other high-end hotels moving further up the ladder with every new position.
I joined compass in January 2011 working as senior chef de partie for Restaurant associates in the fine dining kitchen in the RBS contract for a year and then two years at Birmingham airport in the Emirates lounge.
After eighteen months back in hotel restaurants I re-joined Compass as Head chef at Parklands (Compass HQ Birmingham) for two years then moved into the role as regional support chef for 14forty, providing culinary support and training to the sites in the South West.
Over my time with compass I have competed in culinary completions such as Hotelympia and the hospitality show winning medals myself and coaching apprentices to win medals.
I am from a hardworking family with a strong work ethic and that’s what you can expect to see from me coming into this contract, supporting others with my culinary knowledge and knowledge of compass standards/systems as well as getting my hands dirty and getting stuck into what needs to be done.
With lots of new innovations coming into this contract it’s hard to say what I am looking forward to the most, if I had to choose it would be the partnership with Simpsons that really excites me!
I look forward to meeting the teams all over the contract and getting down to business!